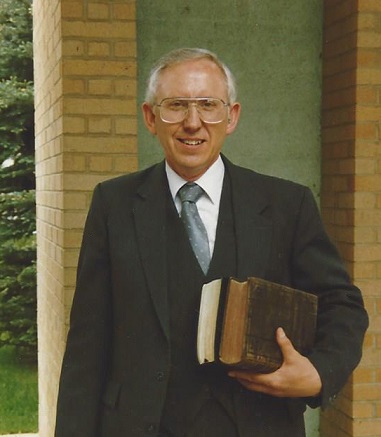 Pastor Corkish was born in the most southern part of Arizona, where he attended grade school. That part of his life was spent pursuing two ventures: One was his classical music lessons, and the other was hiking in the mountains where he lived. Then his family moved to Denver where he was graduated from Senior High School. When he was fifteen years old he accepted, Christ as his Personal Saviour and life was never the same after that! He had already met a young lady who would eventually become his wife after she found the Lord. Both of them were active musicians and played and participated in 1,000 entertainment shows in radio, television and other musical events. They were both church organists.

Pastor had always had an interest in the military, having lived through the entire Second WW, it was natural that when he attended the University of Miami in Florida, right after High School with the purpose of being trained for Television broadcasting, and that he would take classes in R.O. T.C., as he had done in High school. It was also natural for him to be the organist in a very large Baptist Church in Miami. It was here that he was baptized and then immediately called into the ministry as a Pastor. This would also change some things in life.

The Korean War was going on and Pastor felt that he could join the military (during the Korean War) and later go to Bible College on the GJ. Bill. That is how it worked out, according to God's order, and after a year and a half of serving in the Infantry and Advanced Infantry, he was transferred, by the grace of God, to work with a Born -again Baptist Chaplain on an Artillery Training Post in Central Michigan. The young lady whom God had put in his life in High School had become his bride just before he became the Chaplain's Assistant. This gave opportunity for great training in the Word of God, soul-winning and discipleship for both of them.

Being released from active duty, they attended Bible College in Chicago, while working in several churches in the area. The family had grown with two children being born by then. Pastor became the Director of Christian Education for three years in a large Baptist Church in Illinois, and then built a church in Oswego, Illinois where he stayed for seven years. His next church was in Durango, Colorado where he had a weekly Radio Broadcast, and eventually started a Christian School for grades K-12. One of their great ministries has been to visit many mission fields in nations around the world. Indeed, the ministry has been worldwide!

He and his wife also continued with their own education, eventually earning Degrees up to and including Doctorates. Moving to Salt Lake City, where they have served the Lord for forty years has been a wonderful and profitable experience for them and the churches they have and are serving have been and are a great "company of believers.", They continue actively, spreading the Word to the world with their conservative music, expository preaching, teaching, counseling, and soul winning.